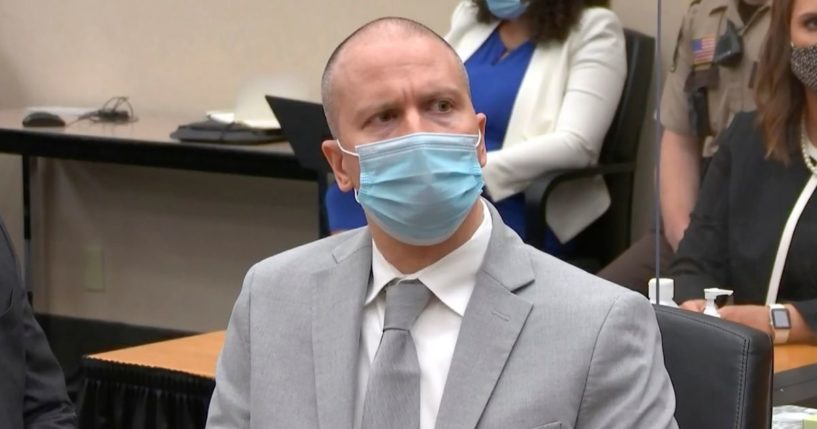 Derek Chauvin’s murder conviction was a pivotal event in American history — not as the moment of racial reckoning the professional race-baiters have sold it as, but rather as the day the Sixth Amendment died.

The white former Minneapolis police officer was convicted of three counts of murder and will spend more than two decades behind bars after George Floyd, a black suspect, died while in his custody in May 2020.

Instead of the usual case of an impartial jury finding him guilty beyond a reasonable doubt (much more on that in a bit), it now appears there was a concerted effort to scapegoat and sacrifice Chauvin to appease the violent mobs who burned cities for months.

But you don’t have to take my word for it.

According to Keith Ellison, the attorney general of Minnesota and lead prosecutor in the case, Chauvin would not be in jail but for “ordinary people who courageously bore witness to Floyd’s death and the pressure from a community that demanded accountability and action,” he said in an Op-Ed for The Washington Post.

“For generations, America has been stuck in a cycle of inaction when it comes to addressing decades of mistrust between communities of color and law enforcement,” Ellison began.

“To honor the legacy of George Floyd, we must act now to break the cycle.”

Though Chauvin’s trial didn’t include any official accusations of racism against the ex-cop, Ellison subtly tied his conviction to larger tensions that exist between minority communities and law enforcement (Chauvin was somehow such an unabashed white supremacist that he married an Asian immigrant).

Ellison lamented how the prosecution of cops is scarce, pointing out that “Chauvin is one of the few police officers ever convicted of murder for a death on the job,” he wrote.

The attorney general further recommended “vigorous, visible and swift prosecutions” for officers who harm civilians with excessive use of force but ratcheted up that reasonable proposition into a call for activism.

“They should not be afraid to use all the tools the law puts at their disposal,” Ellison advised other prosecutors. “The visibility of prosecutions, to restore and build credibility with the public, is as important as the vigor employed.”

However, it was his conclusion that proved the outsized influence Black Lives Matter riots and activism had on the outcome of the case.

“My office could not have led the prosecution of Chauvin without the help of ordinary people who courageously bore witness to Floyd’s death, and the pressure from a community that demanded accountability and action,” Ellison said.

It was a sentiment shared by veteran instigator the Rev. Al Sharpton who similarly credited groups like BLM for Chauvin’s conviction and harsh sentence.

“Justice would have been the maximum. We got more than we thought, only because we have been disappointed so many times before,” Sharpton said Friday following the sentencing.

He asserted Chauvin’s 22.5-year sentence is “longer than we’ve ever gotten, but shorter than what we should have gotten in the past” for police involved in other such incidents.

“Let us remember: A man lost his life. This is not a prayer of celebration; it’s a prayer to thank God for giving the strength to this family and those activists that stayed in the streets to make sure this court had to do what was right,” he said in an apparent nod to the rioters who burned down several major cities in Floyd’s name.

But more than Ellison’s words or Sharpton’s rallying cry or Crump’s gratitude, the actual circumstances of the trial reveal the greatest miscarriage of justice when it comes to the influence the racial activists had on Chauvin’s fate.

When footage of Chauvin with his knee across Floyd’s neck first went viral on social media, it sparked a months-long outbreak of protests and riots across the country largely fueled by the unfounded narrative that the incident was a racially motivated killing.

By the time Chauvin and the other officers involved would stand trial, Minneapolis had become ground-zero for those protests — but a judge denied a change of venue anyway.

This meant the jurors were plucked from a city still suffering from the aftermath of those protests tied directly to the man whose fate they would decide.

It was clear those selected were painfully aware of the grave consequences that would await the city all over again if Chauvin was set free as an implicit threat.

But then there was also California Democratic Rep. Maxine Waters who urged protestors at another anti-police rally in Minnesota to “get more confrontational” if they didn’t get their way just ahead of the Chauvin trial verdict — and jurors had not been sequestered at the time she said it.

Worst yet was juror Brandon Mitchell who it was later learned had attended BLM protests and on more than one occasion wore a shirt that specifically referenced the Floyd case with graphics that read “Get Your Knee Off Our Necks/BLM.”

Chauvin was no choir boy, but he still deserved a fair trial that the Sixth Amendment specifically guarantees to all who are accused under the law.

Instead, what he got was an activist media exploiting racial tensions and a violent mob to influence prosecutors and jurors to send the man to jail.

Never mind that it could have been the number of drugs in Floyd’s system or resulting excited delirium that caused his death — only Chauvin’s conviction would appease the mob.

Many on the left cheer the verdict and the decades-long sentence as a victory for their movement, but it’s more likely this was a loss for the right to a fair trial.

Today it’s Derek Chauvin rotting in jail after facing such odds, a prospect many don’t find so bad considering he appeared to be callous and cold while a man died on the street — but who will it be next time?