NEA’s attacks with a promise to “continue to take on ideas like CRT.” 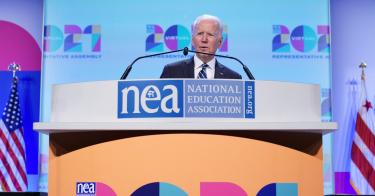 The Heritage Foundation and its experts have been tireless in its efforts to fight critical race theory.

It’s not often you get singled out for attack in a resolution by one of the nation’s biggest unions. But in its zeal to shove critical race theory into schools, the National Education Association singled out The Heritage Foundation as “one of the well-funded organizations” that is committing “attacks on anti-racist teachers.”

The resolution calls on the NEA to conduct “research” into Heritage and other such groups—a polite way of saying it plans to smear critics of CRT. We’re not intimidated and we won’t be backing away from our effective strategy to educate Americans about the dangers of CRT.

Heritage’s Lindsey Burke, director of the Center for Education Policy, and Mike Gonzalez, the Angeles T. Arredondo E Pluribus Unum senior fellow, responded to the NEA’s attack with a promise to “continue to take on ideas like CRT.” They said in a statement:

Heritage is proud of its comprehensive work in this field, which has always focused on explaining the facts behind critical race theory and how it is infecting all aspects of our everyday life. We stand with parents, educators, lawmakers, and other Americans who want children to learn about all of America’s history, without indoctrinating them in a toxic narrative that undermines student unity and achievement or implementing CRT’s racially divisive principles in ways that violate the Civil Rights Act and the Constitution. Efforts to treat students or educators differently based upon their skin color not only betray fundamental principles, but they also violate federal civil rights laws and other statutes.

Only a few days later, the NEA scrubbed this resolution from its website after considerable pushback from conservative organizations, including Heritage. The NEA’s original resolution, along with the fallout, earned major coverage in multiple news outlets.

Before it was removed from the NEA’s website, the resolution stated:

NEA will research the organizations attacking educators doing anti-racist work and/or use the research already done and put together a list of resources and recommendations for state affiliates, locals, and individual educators to utilize when they are attacked...


The attacks on anti-racist teachers are increasing, coordinated by well-funded organizations such as the Heritage Foundation. We need to be better prepared to respond to these attacks so that our members can continue this important work.

Critical race theory, or CRT, makes race the prism through which its proponents analyze all aspects of American life, categorizing individuals into groups of oppressors and victims. It is a philosophy that is infecting everything from politics and education to the workplace and the military. In the aftermath of the 2020 protests, CRT became the rallying cry of numerous organizations, businesses, and educators.

The Heritage Foundation has been tireless in its efforts to fight critical race theory and numerous Heritage experts have appeared in television interviews and published several reports and commentaries on the issue.

Last year, Gonzalez co-authored a comprehensive Heritage report on the subject with Jonathan Butcher, the Will Skillman fellow in education. The report, “Critical Race Theory, the New Intolerance, and Its Grip on America,” is one of Heritage’s most-read publications.

Since then, Gonzalez has crisscrossed the country to bring his research on critical race theory and identity politics to audiences eager to counter these left-wing ideas. He has briefed lawmakers in Louisiana, spoken at major conservative conferences, and counseled parents how to fight back against the left’s indoctrination of their kids. In addition, Gonzalez is a go-to resource for media outlets who want sage insight on the dangers of critical race theory.

Gonzalez has also teamed up with Burke to expose colleges of education as a source of critical theory, an offshoot of CRT.

Heritage also published a report by Christopher Rufo, one of CRT’s leading critics, warning of its implications. The report, “Critical Race Theory Would Not Solve Racial Inequality: It Would Deepen It,” documented how critical race theory seeks to undermine the foundations of American society and replace the constitutional system with a near-totalitarian “antiracist” bureaucracy.

Rufo spoke out against the NEA’s latest effort to smear CRT critics, naming Gonzalez as an ally, and promising to counter those who are “ruining American education.”

Heritage’s work is getting noticed. “The Morning Call” newsletter recently praised Rufo and Gonzalez for their leadership:

Rufo and Gonzales are, almost without question, the leaders of the campaign to push back against CRT, and their efforts are (almost) entirely cultural, not political. … Rufo and Gonzalez are neither ham-handed in their calls for state intervention nor quiet and sneaky. They have the luxury of not only being right on the facts, but also of knowing that what they are exposing is largely unknown but would be rejected by the majority of the American people.